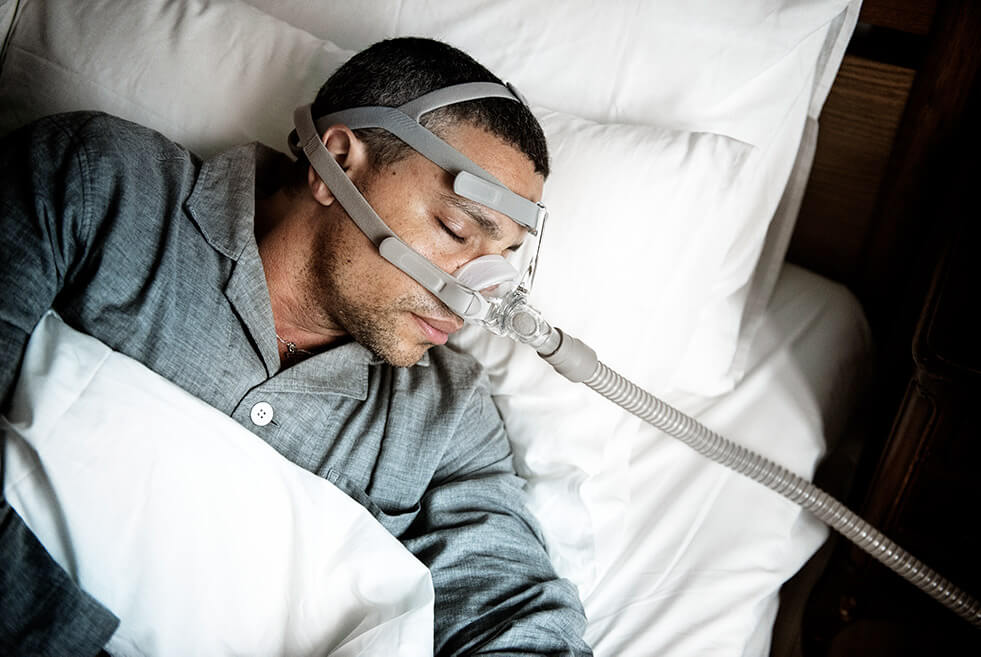 When you have sleep apnea, you experience pauses in breathing during sleep. You do not take air in, which causes the lack of oxygen. People often wake up at night suddenly with a sensation of gasping. Many people do not know that they have stopped breathing. They snore loudly and may believe it is regular snoring.

In this article, we have explained sleep apnea, its types, symptoms, causes, natural treatment options and much more.

What is sleep apnea?

Sleep apnea is a sleep disorder in which your breathing is interrupted while you slumber. A person suffering from this disorder can stop breathing for 10 to 30 seconds, and it can occur even hundreds of times during one night.

If sleep apnea is not treated on time, it can lead to tiredness, stress, and serious health issues such as high blood pressure. It can also cause loud snoring, which is different from regular snoring. Regular snores are not as loud as snores due to sleep apnea are.

What are the types of sleep apnea?

It is the most common kind of sleep apnea. In it, the throat muscles collapse during sleep and disturb normal breathing. When throat muscles collapse, they cause partial or complete blockage of the upper airway. During this period, the chest muscles and diaphragm try to open the airway by increasing pressure. You may resume breathing with a loud gasp.

It happens when your brain fails to send messages to muscles that control breathing. It is due to the instability of the brain part that regulates breathing. Central sleep apnea usually occurs in people who have a neuromuscular disease.

Complex sleep apnea syndrome is a combination of the above two types of sleep apnea. It is also referred to as treatment-emergent central sleep apnea. People suffering from this syndrome have a breathing issue even when airway obstruction has been removed.

It is a recently identified type of sleep apnea. Scientists and health specialists are still studying it to identify its exact cause and characteristics.

What happens during a sleep apnea episode?

During a sleep apnea episode, your heart rate decreases depending on how long the episode lasts. Your involuntary reflexes kick in and cause a body jolt that wakes you up. When this occurs, your heartbeat and blood pressure increase.

The effect of these changes is not severe if they occur rarely. But they can cause chronic effects if you experience several episodes in one hour.

Sleep apnea occurs more commonly in men compared to women. It can affect an individual of any age. Even children and babies can have sleep apnea. However, older adults and overweight people are seen to have it more.

Certain physical characteristics are found to be more common in people suffering from sleep apnea. Some of these characteristics include a long neck, excessive weight, small jaw, and enlarged tonsils.

Sleep apnea occurs more commonly in men compared to women. It can affect an individual of any age. Even children and babies can have sleep apnea. However, older adults and overweight people are seen to have it more.

Certain physical characteristics are found to be more common in people suffering from sleep apnea. Some of these characteristics include a long neck, excessive weight, small jaw, and enlarged tonsils.

Obstructive sleep apnea occurs due to the relaxation of throat muscles. When these muscles relax, your airway closes either partially or completely. Lack of air reduces oxygen concentration in blood. The brain senses this issue and wakes you up to resume breathing by reopening the air passageway. It can keep happening up to 30 times or even more per hour.

Central sleep apnea is found in people who have a neuromuscular disease such as amyotrophic lateral sclerosis or central nervous system dysfunction.

how do you know if you have sleep apnea?

A person experiencing sleep apnea symptoms may have sleep apnea. You need to visit your doctor and get the issue diagnosed before starting a treatment.

Symptoms of sleep apnea may be hard to understand in children and include:

After asking you about your symptoms, the doctor will then check your medical history to find if any of your family members have the same issue or not. He will also do a physical examination to look for the signs that can cause sleep apnea.

He may then ask you to have a sleep study which is called a polysomnogram. It is performed in the presence of a trained technologist in a sleep laboratory. He records different body functions, including eye movement, heartbeat rate, breathing rate, the oxygen level in the blood, and electrical activity of the brain.

There is another test that your doctor may recommend if you are an adult and want to have a sleep test at home. It is called the Home Sleep Test. It will record fewer body functions compared to a polysomnogram.

Which factors increase your risk of sleep apnea?

Sleep apnea can affect people of all ages. However, certain factors increase the chance of the development of sleep apnea.

The risk factors for obstructive sleep apnea include:

The risk factors for central sleep apnea include:

This treatment is suitable for people having moderate to severe obstructive sleep apnea. In it, a machine is used to keep the airway open with the help of a mask that the person wears while sleeping. The mask sends air through the mouth and nose. It stops the airway from collapsing.

PAP therapy stops apnea episodes as long as you are using the machine.

Though it is an effective treatment, some people do not like it because of the mask that makes them feel uncomfortable. There are different types of masks and positive airway pressure devices. You should select one that you find the most comfortable.

In it, a stimulator is used to stimulate the hypoglossal nerve, which controls the movement of the tongue. It is timed with breathing. When you breathe, your tongue moves forward, and your airway is opened. This device is activated at night, and it is controlled with the help of remote control.

Surgery is another option that people use to relieve sleep apnea. This option is considered when other options do not work. It is suitable for people with malformed tissues (such as enlarged tonsils, etc.) that cause airway obstruction.

There are different types of surgeries. Some of these are:

If there are any nasal obstructions, they are removed during nasal surgery.

Tonsils that are located at the back of the throat can cause sleep apnea in children. In tonsillectomy, these tonsils are removed.

Mandibular advancement surgery is used for people who have severe obstructive sleep apnea and head-face abnormalities. In this invasive procedure, facial abnormalities are corrected.

During this surgery, radiofrequency radiations are used to reduce the size of soft tissue present in the upper airway.

There are some natural ways that can help you get rid of sleep apnea.

Acupuncture is an effective treatment that may help you reduce sleep apnea. However, only a few studies have tested its effectiveness. More research needs to be done.

Some people believe that valerian and passionflower can also reduce sleep apnea. The effectiveness of herbs is not proven through scientific studies.

Therefore, you should consult with your doctor before choosing them over medications.

Humidifiers maintain the moisture level in the air. Air dryness can cause irritation of the respiratory system. Using a humidifier can help you have clearer breathing.

Certain facial exercises that strengthen different muscles of the face are beneficial in controlling sleep apnea.

Sleep apnea is a sleep disorder that should be treated on time to avoid serious complications. It is found in people of all ages, but it is more common in older adults.

There are different treatment options to treat sleep apnea. Book an appointment for a sleep apnea testing, its underlying cause, and a treatment that suits your condition the best.

5 Ways to keep Your Blood Sugar Levels low throughout the day
June 17, 2022
Organic or Synthetic Vitamin supplements, which one is better?
May 18, 2022
The influenza vaccine has arrived at North Richmond Family Medical Practice.
April 8, 2022
what is e-mental health? E-mental health services in Australia.